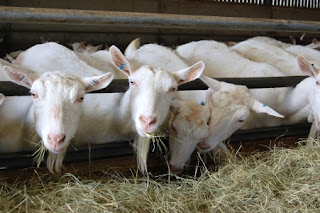 
“Our life is ruled by the cheese, ” he says cheerfully as we take a tour of the dairy. “We'd like to get out more but the goats always need milking.”


The farm has a 230-strong herd, which is milked all year round, and although Golden Cross is technically made on alternate days, in reality the hand-ladelled raw milk cheese needs tending every day. In addition, the company produces another goats cheese called Chabis and a mould ripened sheep's cheese called Flower Marie, which require similar levels of care and attention. 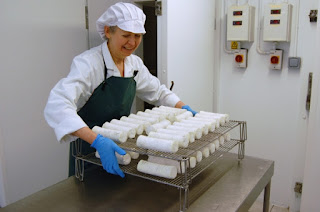 “It's a 24/7 life,” says Alison. “If we're not curdling or ladeling we're salting and turning the cheese from the previous day. It's a bit like Blue Peter: 'here's some I made earlier'.” 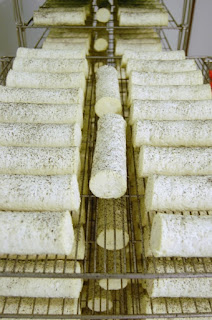 The hands on approach is a world away from some of the big goats cheese factories where curd is extruded into long sausages and sliced into perfect logs, she explains, as she wraps speckled white batons of Golden Cross ready for despatch (a time consuming job in itself).

Despite all the hard work (or perhaps because of it), it's clear that the couple have a great love for what they do and enjoy working together. Their dedication certainly pays off when it comes to the cheese.

Golden Cross is a modern classic. Zingy and fresh with a velvety texture when young, it becomes denser, creamier and more intense as it matures with a lovely gooey breakdown just under the white fluffy rind.