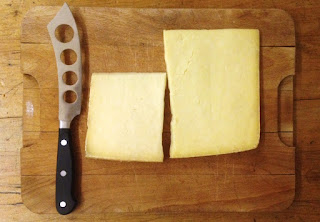 But there are some cheeses I go back to again and again. Barkham Blue is one, so is Stawley goats' cheese and I have a deep love for gouda-style Berwick Edge on the rare occasions I can find it. Kirkham's Lancashire is another that I always buy when I can.

Ruth Kirkham first began making Lancashire at Beesley Farm, near Goosenargh, more than 35 years ago, after being taught how to make the cheese by her own mother. Still involved today, the famous Mrs Kirkham has passed on her expertise and the bulk of cheese-making duties to her son Graham, while her husband John still looks after the cows.


It's a unique cheese, made in the traditional way with a mix of curds from the previous three days, which helps control acidity and gives the cheese complexity and a wonderful mellow quality. It's buttery, yoghurty and has a pleasant lemony tang with a light, springy, almost fluffy texture. The flavours don't shout at you, but are beguiling and elusive, encouraging you to go back for another slice. You can see why Graham Kirkham describes his cheeses as 'dreamy creamies'.

Typically, Kirkham's is aged for three months, but on a recent visit to Neal's Yard Dairy I spotted they had Kirkham's 'Tasty', which had been matured for longer in the shop's maturing rooms under the railway arches in Bermondsey.

The younger cheese had been made at the end of January in large 25kg truckles and the Tasty two months before in smaller truckles (15kg I think), and the difference between them was really noticeable. The older cheese was harder, drier and had a much sharper tang. And the flavour was more intense with pronounced meaty, savoury notes and a little bit of pepperiness on the finish, especially close to the rind rind.

The cheesemonger at Neal's Yard said that they plan to mature Kirkham's for even longer and it will be fascinating to see how the extra weeks and months further change the cheese. I appreciated the bolder flavours of Tasty, but my cheese knife was still drawn inexorably to the classic version and its seductive fluffiness. Just don't call it my favourite cheese.

If you want to discover more about this great cheese, Andy Swinscoe of The Courtyard Dairy in Settle has made a terrific video on one of their visits to the Graham Kirkham. Check out that fluffy texture at 3.25min!