CHEESE OF THE WEEK: Quickes Vintage 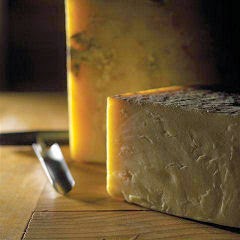 I paired this cheese with a cider at a recent event I organised with the Brighton Food Society and it went down a storm. Devon producer Quickes Traditional ages most of its cheddars for around a year, but some have the potential to be matured for much longer. Quickes Vintage, which is made with pasteurised milk, is 24 months old when it is released, making it one of the most mature farmhouse cheddars in the country.

Owner Mary Quicke describes her cheeses as being “10-mile cheddars” in that if she tastes a piece before driving away from the farm, the flavour will still be developing on the palate 10 miles later. Unlike über sweet block cheddars, Quickes Vintage has what Mary describes as a 'grand staircase of flavours' taking in creaminess, intense savoury 'umami' notes and a lovely mellow caramel sweetness.

Cheddar always traditionally had complex savoury flavours – it's a fundamental characteristic of the cheese - but the big supermarkets have put pressure on their suppliers to make ever sweeter cheddars using a starter culture called Helveticus (used in Swiss cheese). This gives big more immediate sweet and fruity favours and is now so common that the original characteristics of cheddar are in danger of being lost.

Several farmhouse cheddar makers feel very strongly about the issue. One told me he wanted to run a cheddar road show educating people to 'savour the savoury' in cheddar cheese, while Mary often talks about the importance of holding onto cheddars that have different layers of flavour, including savoury notes.

This is how she put it to me a few years ago when discussing the difference betwee male and female cheesemakers (Quickes has been run by women for more than 30 years): “As a business we've always prized complexity, subtlety, balance and length of flavour. Is that because it's a female thing? We want to be seduced and allured on our way to pleasure; not beaten up!”

Where to buy: Widely available in delis and farm shops.

How to eat: Mary Quicke likes to serve it with a salad of leaves and flowers from her garden and Fred's Kitchen chutneys.

What to drink: I paired it with Wobblegate medium cider on the night, but it would also work with a darker ale like Pure UBU from Purity Brewing Co.