CHEESE OF THE WEEK: Occelli in chestnut leaves

Mention the words 'flavoured cheese' to a serious fromage lover and their face will usually fall into a stern look of disapproval. At the big international cheese awards, this class is generally full of products laced with cranberries, mango and curry powder and are widely dismissed (rightly in my view) as being awful gimmicks.

But as with so many things in life, you can't generalise. There are some terrific flavoured cheeses. Lynher Dairies in Cornwall is a case in point. It's nettle-wrapped Cornish Yarg is a modern British classic, while its lesser known Wild Garlic Yarg won the Flavour Added Cheese category at this year's British Cheeses Awards.

There's a long history of wrapping cheese in leaves with classics such as Banon in France (a cow's milk cheese wrapped in chestnut leaves) and Valdeón in Spain - a blue encased in sycamore leaves. The leaves act like a natural packaging, look beautiful and also imbue the cheese with very distinctive flavours.

Italy has a particularly strong tradition of leafy cheeses. Robiola is often wrapped in fig and cherry leaves and burrata was traditionally covered in a herb-like leaf called asphodel. Beppino Occelli – a cheese producer in Piedmont – is an expert in the field with 'grand' cheeses covered in everything from Barolo grape must and malted oats to tobacco leaves and even straw. 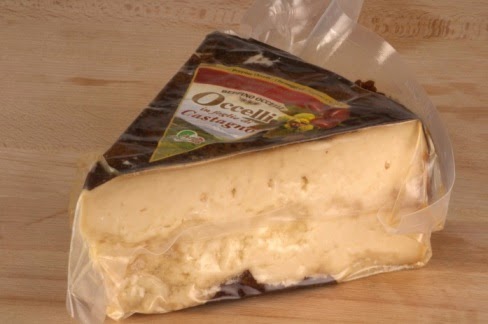 It's an unusual cheese - tart and yoghurty with sweet pineapple flavours and an interesting fudgey breakdown just under the rind, which has an almost boozy intensity.

It's also a great example of why you shouldn't dismiss all flavoured cheeses. Maybe it's time to turn over a new leaf.

Where to buy: It's supplied by wholesaler The Cheese Cellar to various outlets including Selfridges

How to eat: This is definitely a table cheese – something to appreciate and savour, rather than put in a sandwich or cook with. In Piedmont they make a compote called 'cugna' from grapes and autumnal fruits such as apples, figs and hazelnuts, which would make a nice accompaniment.

What to drink: We ate it with the dark, rich and wondrous Bracia ale from Thornbridge, which is made with chestnut honey.