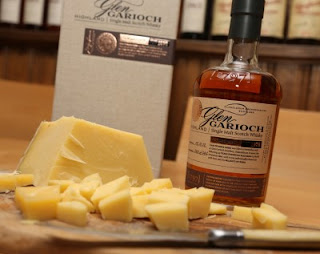 Most people wet their whistle with wine (that's a lot of Ws) when they're eating cheese, but I've always thought beer and cider work just as well. I'd not considered pairing cheese with whisky; that was until Glen Garioch - one of Scotland's oldest distilleries got in touch.

The company's tasters have done a lot of work exploring the world of cheese and whisky and have come up with some interesting combinations. They reckon their Glen Garioch Founder’s Reserve is a top match for Comté, while their 12 Years Old goes best with salty Parmigiano Reggiano. Scottish cheeses, such as Lanark Blue and Criffel, also work, as do Lancashire and Caerphilly.

The Aberdeenshire company is currently running a competition with the winner going on a two-day, all expenses paid trip to the area where the whisky is made. It includes a VIP tour of the Glen Garioch distillery and a private tasting with Master Blender Rachel Barrie. A whisky and cheese matching session will also be held during the visit.

For your chance to win, enter via the Glen Garioch Facebook page:

* More on whisky and cheese matching in later blog posts, when I've had a chance to do some serious tasting!

Mary Holbrook and the rise of British goat's cheese

Goat’s cheese doesn’t always get the respect it deserves in this country. That’s partly due to Britain’s climate and landscape being suited to grazing cows and making big cheeses, such as Cheddar and Lancashire. It’s also because many people have only ever tried those mass-produced logs of goat’s cheese that either taste of nothing or have such a “goaty” tang they put people off for life.

But it doesn’t have to be this way. Britain now makes some acclaimed goats’ cheeses that have earned the right to strut their stuff on any cheeseboard.

British goat's cheeses, such as Tymsboro, Cardo and Stawley, are among the very best cheeses he has to offer.

Cardo and Tymsboro are produced by veteran cheesemaker Mary Holbrook using milk from her own herd at Sleight Farm near Bath, while Stawley is made in the village of the same name by newcomers Will and Caroline Atkinson.

Like many other young British cheesemakers, the Atkinsons trained at Sleight Farm before setting up their own business in 2009. Will Atkinson, who makes Stawley with his wife Caroline using raw milk from their own goats, is effusive about Holbrook's impact. “She's the godmother of British goat's cheese,” he says. “There was a dearth of artisan goat's milk cheese producers before Mary. She did it off her own back over 30 years ago.”

Holbrook modestly brushes the tribute away when I speak to her. “It's curious to be called a godmother!” she laughs. “I don't feel like that. I've just been doing it for a long while, but it's nice that my cheeses are well thought of.”

Shaped like a pyramid with the top cut off and a pretty charcoal-dusted rind, Tymsboro was one of Holbrook's first cheeses and is similar to a classic French Valençay. It's made with raw milk and is creamy with a silky smooth texture when young, but can be aged for up to two months becoming denser and more concentrated in flavour as it matures.

Intensity is also a characteristic of Cardo – a much larger washed rind goat's cheese that is based on the mountain 'queijos' of Portugal. Holbrook uses the dried petals and stamen of a thistle-like plant called cardoon to curdle the milk, rather than traditional rennet, before cutting the curd by dragging her bare arms through the vat.

The unusual production process leads to a cheese with a unique texture, ranging from meltingly soft to quite firm, while the flavour takes in chicory notes from the cardoon with a big meaty hit from the sticky orange rind.

It's a very different cheese to the gentle Stawley, which is sweet and milky with a pretty wrinkled rind. “Our cheese doesn't have any of those strong goaty flavours that often put people off,” says Atkinson. “We've managed to persuade some who say they don't like goat's cheese to change their minds after tasting Stawley.”

A longer version of this article appeared in the May issue of Harrods Magazine. To read it click here