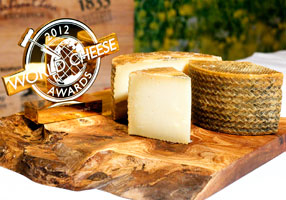 You could have cut the tension with (ahem) a cheese wire. A crowd of fromage freaks watched nervously from the sidelines . Bob Farrand, co-organiser of the World Cheese Awards 2012, suddenly blurted out that he had goosebumps.

For the first time in the awards' history, there was a tie between two cheeses in the battle to be named World Champion. In one corner was a Manchego. In the other a blue buffalo milk cheese from Italy. They were the last two cheeses standing from 2,781 entrants to the annual competition. After guzzling cheese for eight hours, the grand panel of judges had one last crucial decision to make. Which of the two would take the title? 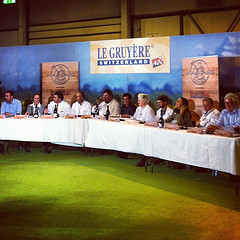 In the end the Manchego won it by a whisker after a show of hands vote from the judges. Made by a company called Dehesa de los Llanos in Albacete, the Manchego DO Gran Reserva is made with raw milk and matured for at least nine months. It was the first Champion from mainland Spain in the two decades that the awards have been running.

"A stunning cheese - light, with high notes like a choral song and an aromatic, long finish,” is how the judging panel described it. After recovering from his goosebumps, Farrand declared  it "an exquisite example of an artisan cheese made with incredible skill".

The blue cheese that oh, so very nearly took the crown was a rich brick-shaped blue called Blu di Bufala (below) from a company called Azienda Agricola Gritti Bruno E Alfio. Hard cheese, you might say. 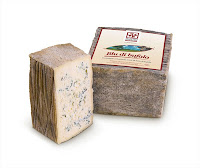 In all, 255 judges from around the world took part in the awards, staged alongside the BBC Good Food Show at the Birmingham NEC.Cheese from 30 countries was entered into the awards with 75% of entries coming from overseas.


Two British cheese made the final shortlist of 16 Super Gold cheeses: Spenwood, a hard-pressed cheese made from unpasteurised ewe’s milk, matured for six months; and Barkham Blue, a buttery blue made with Guernsey and Jersey milk. There was also a really good showing from the US (see below for the full list).

The top 16 Super Golds at the
World Cheese Awards 2012

The entire list of all the award winners can be downloaded here.

Cheese brain of Britain: a tasting at Leiths 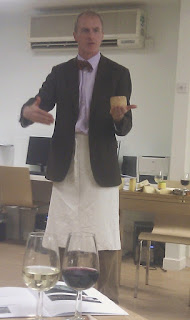 Meet Tom Badock. That's him there in the very badly taken photo (my fault) holding a small round cheese in the palm of his hand.

Look at him closely. He appears to be a perfectly normal individual (apart perhaps for the bow tie), but I can assure you that he is not like everyone else. This man is one of the preeminent cheese brains of Britain.

I know this because I was recently invited to a cheese tasting hosted by Badock at Leiths School of Food & Wine, where he spoke solidly and entertainingly about mountain cheeses for the best part of three hours.

Describing the event as a 'cheese tasting' is a bit like saying The Odyssey is a story about a bloke taking a holiday cruise round some Greek islands.

Badcock's talk, which was subtitled Altitude, Attitude and Magnificence, was a tour of some of Europe's best mountain cheeses taking in thousands of years of history, the importance of cheese in culture and language and even how the modern banking system owes a huge debt (excuse the pun) to cheese making and maturing. 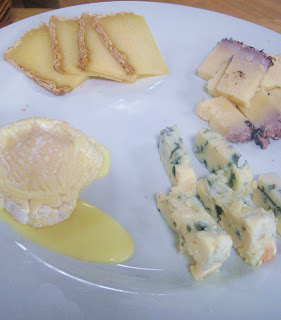 He works for the Cheese Cellar, one of Britain's largest wholesalers of artisan and farmhouse cheeses to food halls, delis and restaurants, and he has made it his mission "to know more about cheese than anyone else".

"It's a hopeless task," he said looking rather happy.

We started with a Pecorino Sardo Fiore - a simple 'prehistoric' cheese, according to Badock, which has been made for over 10,000 years. Originally, shepherds would have cooked sheep's milk over open wood fires and curdled it with fig leaves in their mountain huts. It was rough and spicy and had a soapy rind due to saponification - a process that is used to make soap. "The gap between soap and cheese is very narrow," said Badcock seriously. 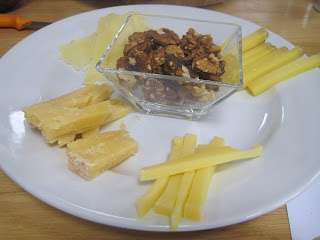 These little nuggets of knowledge peppered the entire evening (see below) and was the kind of geeky knowledge that fans of QI (like me) appreciate.

Badcock showed that cheese is a way of understanding the world. I've heard Sheila Dillon of BBC Radio 4's Food Programme say something similar about how food is a lens through which to understand what's happening around us.

We tried 16 different cheeses altogether, plus copious amounts of bread and chutney. Top cheeses of the night included a Pastourelle Roquefort and an Italian cow and sheep's milk cheese called Testun al Barolo,which is covered in nebiollo grape must and matured by Bepino Occelli. It was sweet and creamy and alcoholic.

I have to admit that I was reeling by the end - more from the cheese than anything else. Everyone else seemed to be tucking into the final plate of Reblochon fermier quite happily, but I could only manage a few bites. I don't like to think of myself as a cheese lightweight, so I'm blaming a huge lunch just a few hours before.

* The words 'fromage' and 'formaggio' come from the ancient Greek word for baskets - 'phormos' - which were used as cheese moulds. 'Cheese' comes from the Latin word for the food itself, 'caseus'.

* The holes in Emmental come from a particular type of bacteria, which emits carbon dioxide. The gas rises to the top and would break through the rind, if it wasn't for the fact the cheeses are turned regularly.

* The mountain villages where Gruyere and Comte are made tend to be around eight miles from each other because this is how far a cow can walk in a day.

* Cheese was historically so valuable that it was used as collateral and to store wealth, like gold. Large cheeses like Gruyere and Parmesan would be kept in underground vaults as they matured and increased in value - just like money accrues interest in banks today.

Leiths School of Food & Wine in West London holds regular tasting classes on a variety of subjects. They last for two hours (although ours lasted more like three) and cost £75. See here for more details. 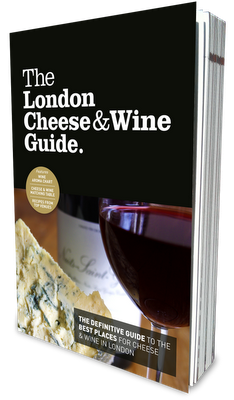 Last week saw the launch of this great little guide to the best places to buy cheese and wine in London. You often see small sections in guide books on where to buy good food and drink, but it's weird that that no-one has thought to do something more specific and comprehensive before. It seems like such an obvious good idea.

The book is split into sections on cheesemongers, delicatessens, wine merchants, wine bars and food halls with concise reviews and photos of the venues, plus useful information on prices, types of cheese and opening hours.

My favourite sections were dedicated to the best cheese stalls at London markets (it must have taken the editors Lucy Gregory and Jeffrey Young ages to put that bit together), as well as a nice selection of restaurants that do good cheeseboards, such as Le Gavroche, Medlar and Brawn. Some of the chefs have also supplied some excellent cheesey recipes like Baronet and Cauliflower Bavarois (The Square) and Parmesan Biscuits (Chez Bruce).

The book was launched at Harrods, which not surprisingly appears in the Food and Wine Halls section (its cheese counter stocks around 135 cheeses apparently), with some interesting cheeese and wine matches from Gregory and wine writer Matthew Jukes (pictured below), who has also contributed to the book.

The standout tipple was a 2008 Chablis (Pinson Grand Cru Les Clos), which was full of zest and minerality, and was just too good for the Beaufort. There was also an amazing sherry-like Vin Jaune from the Comte region, served with some 24-month aged cheese.

I really liked a mysterious blue cheese soaked in alcohol (red wine?) called Blue 61. I can't tell you anymore about it, except that it was rich, creamy and boozy, and probably Italian. There was also a strange 'Dolce Blu' cheese (pictured), which had been matured in whiskey and was covered in chocolate. I love chocolate, whiskey and cheese, but just not all at the same time.

The London Cheese & Wine Guide (169 pages) is published by Allegra Publications and has an RRP of £11.95 (although it's cheaper than that on Amazon.)