CHEESE OF THE WEEK: Cotherstone 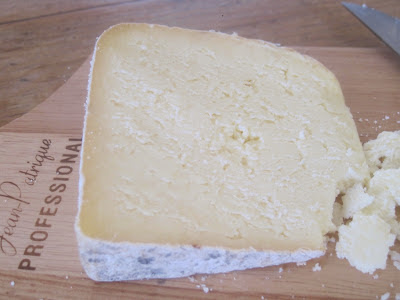 One of my more interesting cheese finds of recent weeks came at the Neal's Yard tasting I attended last month. The first cheese of the evening was a pale yellow, crumbly little number called Cotherstone, which I had never heard of before even though it's far from being a new cheese.

Joan Cross has been making Cotherstone to a recipe handed down from her mother for over 30 years. Initially she made it in her kitchen in Barnard Castle, County Durham, leaving the milk to sour naturally in a big milk churn. Things have moved on a bit since then, but she still makes it in very small batches at Quarry Farm. Such small scale production, combined with the fact that she is the last remaining producer of this type of cheese, helps explain why I hadn't come across Cotherstone before. This is a very rare cheese.

It's made with pasteurised cow's milk and is a bit like a Wensleydale in that its moist and crumbly with a lemony tang. But the piece that I had also had a creamy layer just under the rind that had broken down and was much softer with a rich mushroomy flavour.

According to Neal's Yard, Cotherstone is technically not very complicated to make: “Basically the milk is soured, set, milled and moulded.” These kinds of fresh crumbly cheeses, sometimes known as Dales-style cheeses, are associated with the rugged landscapes of Yorkshire and the North East where it was traditionally hard to farm large herds of cattle.

Farmers would only make small amounts of cheese at home to feed their family and perhaps have a bit left over to sell at market, so they tended to be simple to make and eaten when they were young. There's more on the history of Cotherstone here.


How to eat: Nice with a slice of Parkin cake.

What to drink: We had it with a Belgian ale called Saison Dupont, which had a bit of zesty fruitiness going on. Good beer.