I can't get my head round the fact that a reduced-fat Gouda-style cheese from the Netherlands was named the best in the world at the 2012 World Championship Cheese Contest in Wisconsin. 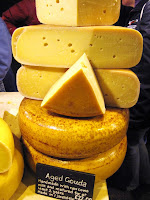 I should make it clear now that I haven't tasted the cheese, but I just don't see how a reduced fat cheese made by a massive dairy multinational is the best the world has to offer. What about Brie de Meaux? West Country Cheddar? Manchego? Or even a full-fat Gouda like the two-year-old raw milk beauty (pictured) I sampled at Borough Market last year?

An international panel of judges in the US obviously knows better. They picked the Dutch cheese, called Vermeer, from over 2,500 entries from 24 countries. Out of a possible 100 points, the cheese scored 98.73 in the final round of judging.

The fact that US cheesemakers dominated the competition, winning gold medals in 55 of the total 82 categories judged, suggests that the World Championship Cheese Contest doesn't have as wide a remit as the name implies. Switzerland came in second with seven golds, but there wasn't a single gold for French, Italian or British cheeses.

Anyway, back to the reduced-fat Vermeer. It's made by the FrieslandCampina cheese factory in Steenderen, Netherlands - a company that has 14,500 member dairy farms in the Netherlands and sells products including butter, yoghurts, custards, milk powder and other ingredients used in the food and pharmaceutical industries. Each year, FrieslandCampina  processes 8.5 billion kilos of milk and, in 2010, sales amounted to nearly nine billion euros.

If they are making the best cheese in the world, then I'm a Dutchman.