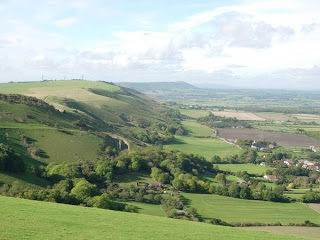 I know people bang on about the wonders of local food all the time, but I confess that I fell out of love with Sussex cheese a few years ago.

Maybe it's because I've lived in Brighton for so long and it all got a bit too familiar, but at a certain point I started taking the local cheese for granted. Instead of appreciating what I had at home, my wandering eye got the better of me and I would find myself betraying my county for sexy little numbers like Barkham Blue from Berkshire or Cerney Pyramid goat's cheese from Gloucestershire.

Somehow they seemed more exotic and glamorous than anything I could get on my doorstep, partly because they were that much more difficult to find. You always yearn for what you can't have.

But I've been reconsidering things in the past week ever since I was served a rather good cheeseboard at the Sussex Food and Drink Awards. It was made up of some of the county's lesser known cheeses and they were remarkably decent with a couple showing real potential for the future. There's more about them below.

They got me thinking about some of the other great cheeses of Sussex that I haven't paid enough attention to recently. Fantastic products like Golden Cross, Lord of the Hundreds, Flower Marie and Duddleswell, which can hold their own against the UK's best cheeses.

When you add it all together, it's obvious that this is actually a pretty amazing place for cheese, especially goat and ewes' milk. I just hope Sussex can forgive me.

Mature Charlton: This new organic cheddar-style cheese from the Goodwood Estate is made with pasteurised milk from the estate's herd of Shorthorn cattle and is rubbed in lard. On the Awards night, it was pleasantly sweet with a nice tang at the end. Not a patch on Montgomery's, but could be the start of something exciting.

Burwash Rose: A rich unctuous unpasteurised cows' milk cheese, which is washed in brine and rosewater. This was the star of the show with a lovely floral depth from the rind. It's made by the Traditional Cheese Dairy.

Sussex Blue: This straight forward blue cheese from Alsop & Walker was smooth and creamy with tiny little blue veins. Would be good for people who struggle with powerful blues.

Sister Sarah: High Weald Dairy was named Sussex Food Producer of the Year for 2012 at the awards and they supplied this sweet, mild semi-soft goats' cheese.