Is there anything worth stealing from Tesco's cheese counter? 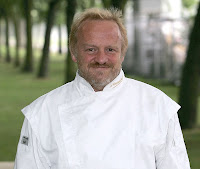 After getting my head round the madness of a celebrity chef shoplifting from one of his own customers (Tesco stocks AWT-branded ingredients), my main question about Antony Worrall Thompson pilfering cheese from Tesco was, 'why didn't he go to Waitrose?'
According to press reports, he was served cheese at Tesco's deli counter and neglected to scan it on the self-service tills. But as any light-fingered chef worth his salt should know, there are much better pickings to be had on the Waitrose cheese counter from aged Ossau-Iraty to Keen's West Country Cheddar.

In contrast, Tesco's counter is home to a dismal collection of factory-made block cheddars and unripe discs of industrial Camembert.

So what did AWT pinch? We don't know for sure, but if I were desperate (which I suppose Wozza must have been), there are a few decent cheeses on Tesco's deli counter. You have to look hard though. This is what I would have gone for:
Swiss Gruyère

Under the terms of Swiss Gruyère's Appellation d'Origine Contrôlée, the cheese must be made with unpasteurised milk and aged for a minimum of five months.
Green's of Glastonbury Cheddar
This 12-month mature cheddar is made by the Green family in West Pennard, Somerset, who have been making cheese for four generations. They are members of the West Country Farmhouse Cheesemakers, who use locally sourced milk and traditional methods.
Jervaulx Blue
Launched a couple of years ago by the Wensleydale Creamery in Hawes, this creamy blue cheese was supposedly first made by French monks in Yorkshire's Jervaulx Abbey in around 1150. It won gold in the Great Taste Awards and British Cheese Awards in 2010. The company's Wensleydale is also a good bet.