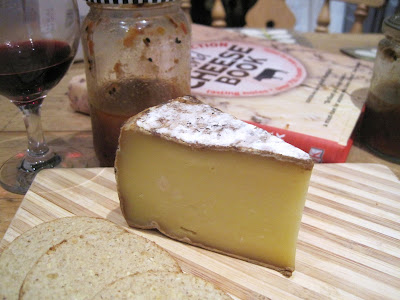 When a friend bought me this little slice of Tomme de Savoie from a farm shop called Uncle Henry's in Lincolnshire, I didn't exactly have high hopes. Uncle Henry's sounds like the sort of twee farm shop that does a roaring trade in jams with silly gingham cloth bonnets on the top; not the kind of place where you buy serious cheese.

Anyway, it turned out that Uncle Henry does know a thing or two about good fromage because its raw milk Tome de Savoie was fantastic. Sweet and creamy at first, it had an earthy mushroomy depth and finished with just a hint of grass. This was definitely one of those cheeses where you should eat the rind. The mouldy grey and brown skin really added to the flavour (there's a brilliant blog post about eating cheese rind here byt the way). It also had a nice elastic yet firm texture, which was good under the grill. Tomme de Savoie on toast with black pepper and a few splashes of Worcestershire Sauce is a thing of beauty. 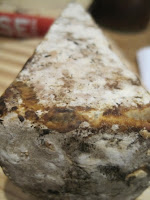 Lots of small cheeses in France are called 'tommes' and they can be made with different milks and in various regions (Tomme de Couchevel, for example, is a small goat's cheese from the Languedoc Roussillon), although Tommes de Savoie is probably the best known. It's made with cows' milk in the Savoie region of the French Alps where Reblochon and Beaufort comes from.

Traditionally, farms made Tomme de Savoie when they didn't have enough milk to produce the much larger Beaufort. Instead, they would skim the cream from the milk to make butter and use the rest to make small 1.5kg-3kg Tomme de Savoie cheeses, which means most are quite low in fat (20-40%).

Anyway, apologies for doubting Uncle Henry. I'm sure his jams are very nice too.

How to eat: Grilled on toast with black pepper and Worcestershire Sauce.

What to drink: A white vin de Savoie is traditional, but a mature red Burgundy with a bit of farmyard to it would also works well.