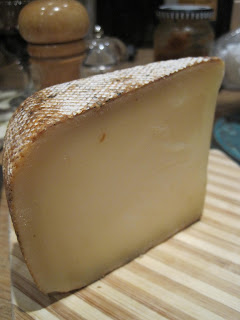 Cheese lovers might not realise it, but they owe a debt of gratitude to monks. From Munster to Wensleydale, via Grana Padano and Epoisses, some of the world's greatest cheeses were developed in Medieval monasteries by Benedictine monks as part of a belief in prayer combined with work and self sufficiency.

It seems strange in this age of modern food manufacturing but monks are still making cheese today. I recently took home a lovely chunk of Abbaye de Belloc from a visit to Raoul's Deli in Maida Vale, London, where owner Geraldine Leventis told me it ranks as one of her best selling cheeses.

An unpasteurised hard ewes' milk cheese, Abbaye de Belloc was first developed in the 1960s by the monks of the abbey of Notre-Dame de Belloc, close to the Pyrenees in the South West of France, and they are still making it today.

Based on an Ossau Iraty recipe, the cheese is made with milk from the local red-nosed Manech breed of sheep between July and December and is dusted with paprika to help develop its pretty speckled brown rind. It's aged for 4-10 months.

I'm not sure how long the cheese I tried had been matured, but I'm guessing it was still relatively young. It had a lovely supple texture with a sweet creamy flavour that developed to nutty caramel with just a touch of wet wool (try it and you'll see what I mean!)

I'd advise against chutneys and pickles. It's a delicate cheese that deserves your full contemplation.

Where to buy: Raoul's Deli, Henri of Edinburgh, La Cave a Fromage

How to eat: Slice and eat. Don't mess about with chutney.

What to drink: A creamy white Burgundy works well, or try a nutty Manzanilla Pasada sherry.