The art of affinage? 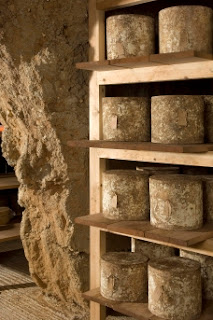 It's not just the washed rind cheeses in the maturing rooms of New York's cheesemongers that have strong personalities, judging by an interesting article in the New York Times. The people running the shops and making the cheese have equally robust views when it comes to the divisive issue of 'affinage'.
You can read the article for yourself here, but, to summarise, the New York cheese fraternity seems to be split into two camps. On one side are mongers like Murray's Cheese, who have built their own temperature and humidity-controlled cheese rooms so that they can practice the art of affinage - a European tradition which involves skillfully maturing and developing cheeses to perfection.
On the other are those that argue that mongers are dressing up simple 'cheese care', practised by all good retailers, as affinage so that they can charge customers more. Or as cheesemonger and author Steve Jenkins puts it in the article: “This affinage thing is a total crock.”
There's nothing a journalist likes more than a good old ding dong, so not surprisingly issues are painted in black and white in the article when in reality they are varying shades of opinion on the subject. That said, it does raise some interesting questions, such as, what is affinage and how is it different to just looking after a product?
In the UK cheesemongers and wholesalers such as Neal's Yard, Paxton & Whitfield and La Fromagerie all claim affineur status. Martin Knapp, the manager of Paxton & Whitfield's shop in Bristol, told me over Twitter that in his opinion, "if you change the nature of the cheese, it's affinage".
The kind of things Paxton gets up to includes making its own truffle bries, soaking the French blue Fourme d'Ambert in sweet Monbazillac wine and ageing cheddars for several months to get a more mature cheese. Knapp also explained that Paxton takes very young or vacuum-packed cheeses that do not have any rind and stores them in a 'rinding room', which has the right temperature and humidity to encourage mould growth.
Where it gets confusing is that some of the stuff talked about by Paxton is done by all cheesemongers. Justin Tunstall at Town Mill Cheesemongers in Lyme Regis told me he turns his cheeses, allows them to breathe or covers where necessary, adjusts heat and humdity and trims and dresses them for display. That sounds like there are elements of affinage going on to me, but he classes it as just 'cheese care'.
It's this grey area that gets some people so hot under the collar. One deli owner told me: "There are too many cheesemongers who think they are the second coming of [legendary British affineur] James Aldridge when all they are doing is caring well for their cheese. I was astounded at the markup some wholesalers/affineurs put on a product for what will effectively be turning the cheese a few times in their 'maturing' room. I think it is a veritable pisstake."
It sounds like the cheese care versus affinage argument is not just an American one, but what do you think? When does cheese care become affinage? And are cheeses from affineurs justifiably more expensive?