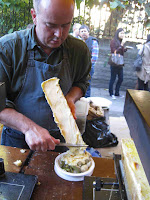 Cheese is nearly always made in the countryside because, well, that's where cows live. But cheese company Kappacasein, which is once again drawing huge crowds at Borough, makes cheese just five minutes from the market under some railway arches in Bermondsey.

Urban cheesemaker William Oglethorpe sources the milk for his cheese from an organic farm in Kent, which rears Brown Swiss and Montbéliarde cows. The milk is brought back to Kappacasein's newly built dairy at Voyager Railway Arches, where it is turned into a halloumi-style cheese called Bermondsey Frier and Bermondsey Hardpressed, which is similar to Gruyere. There's a strangely atmospheric video of the process at the bottom of this post. 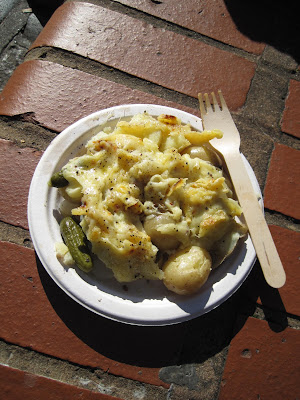 Oglethorpe was the man who helped develop, and gave his name to, Montgomery's washed rind raclette-style cheese Ogleshield when he worked for Neal's Yard.

He was also part of the so-called Bermondsey Seven, who were evicted from Borough Market earlier in the year for trading at new foodie destination Maltby Street (close to where he makes the cheese).

Thankfully, he seems to have patched up his differences with Borough and is now back at the market trying to keep up with the big queues that form at his stall. Here he cranks out plates of new potatoes, cornichons and little pickled onions smothered in the frazzled, bubbling loveliness of melted Ogleshield raclette.

This is the traditional way to eat raclette in Switzerland and France, where the cheese originates ('racler' is French for scrape), although it's made all over the world these days. According to fromage guru Patrica Michelson, in her fantastic book 'Cheese', Swiss raclette tend to be much stronger in flavour than French, particulalrly those made in the high Alps, which are washed in brine and has nutty smoky flavours. 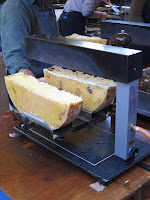 Hot, gooey Ogleshield blobbed over potatoes and pickled onion sounds just about the most awesome hangover dish I can think of, especially when it costs just £5. In the interests of research, I visited Kappacasein's stall with a slight hangover to put this to the test and can confirm that I was instantly cured. Mind you, I did also eat half of one of Oglethorpe's other great inventions - the toasted cheese sandwich made with Poilane sourdough bread and Montgomery's cheddar.