In search of a 3D flavour

Unless you're a vegetarian, rennet is probably not very high on your list of priorities when it comes to choosing cheese, but perhaps it should be.

A growing band of British cheesemakers are switching from using vegetarian rennet in their cheeses in favour of traditional calves' rennet because they say the flavour is much better.
Charles Martell of Stinking Bishop fame is one of them. He told me that his Single and Double Gloucester, Hereford Hop and Double Berkeley cheeses taste "like they used to 30 years ago" and have "a 3D flavour" since he switched to calves' rennet, with none of the bitter notes he was getting with vegetarian rennet. He's thinking of switching to animal rennet in his Stinking Bishop as well.

At the same time Robin Skailes of Cropwell Bishop has developed new calves' rennet Stiltons, which he says are more "rounded" and "complex". I've done a pretty unscientific taste test myself with some Cropwell Bishop and would have to agree. But more on that in a minute.
Before then, I wanted to give a bit of background to rennet, which admittedly is not the sexiest of subjects, but it's important to understand what effect it has on cheese. Traditional rennet, which is also sometimes called 'natural' rennet, is basically a collection of enzymes extracted from calves' stomachs that is added to milk to help it coagulate into curds and whey.

Not surprisingly, vegetarians don't want to eat this kind of cheese, which means classics such as Parmigiano Reggiano and Gruyère are off the menu because by law they must be made with natural rennet.

Quite a few British cheeses, including Montgomerys' Cheddar and Gorwydd Caerphilly are also still made with natural rennet, but a lot of British cheesemakers switched over to vegetarian rennet in the 80s and 90s. This was partly because the big supermarkets wanted to target as wide a consumer base as possible, but also because there were problems sourcing good quality calves' rennet.
The story behind vegetarian rennet, also known as microbial rennet, is not really any more appetising than that of traditional rennet. It's made by fermenting mould (mmm, tasty) and can be associated with slightly bitter flavours in aged cheese because the enzymes target the milk's casein proteins in a general way, while animal rennet acts on specific areas (that's what Paul Thomas, the head cheesemaker at Lyburn, told me anyway).
Stilton producer Cropwell Bishop is interesting because it makes cheese with traditional rennet and vegetarian. Weirdly, Waitrose sells both kinds, so you can actually do a direct taste test. Here they are: 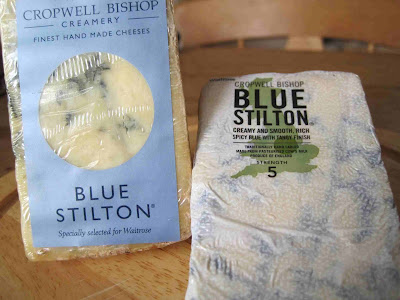 The one on the left is made with vegetarian rennet and the one on the right uses traditional rennet. Interestingly the prices are not that different -   £14.95 per kilo for the veggie cheese and £15.99 per kilo for the other.
Three of us blind-tasted both cheeses and we could all immediately tell the difference. The traditional rennet Stilton was noticeably better. To be completely fair, the vegetarian Stilton was from the bottom of the truckle (it had a rind on two sides), which might have made a difference. And I don't know how long they'd been matured for either. 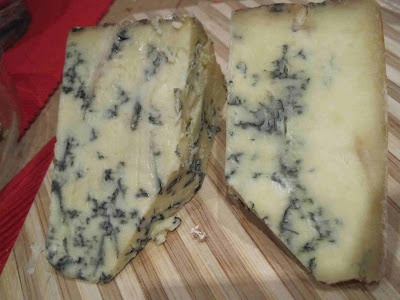 But the flavours of the calves' rennet cheese were definitely more vivid and pronounced. It was creamier, more tangy and had a longer earthy note at the end. '3D' is a good way to describe the flavour. Nigel Tufnel in Spinal Tap would have said its volume had been turned up to 11.
In contrast, the vegetarian rennet cheese was muted with a definite bitterness at the end, or to carry on the Spinal Tap analogy, its flavour volume was a seven with some unpleasant feedback.