CHEESE OF THE WEEK: Ragstone 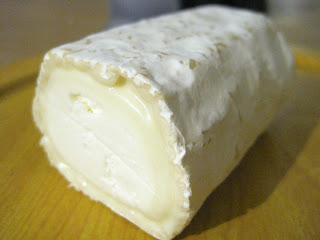 I got a bit over-excited in a previous post about how some British cheesemakers are going back to using traditional calves' rennet in their cheeses (rather than vegetarian) because they believe it gives a more rounded, 3D flavour.

Following on from that, and just by coincidence, I picked up a small log of  Ragstone goat's cheese from Neal's Yard Dairy at Borough Market, which is made with kids' rennet.

Logically, you would think that all traditional goats' cheeses would be made with kids' rennet, but it's actually very unusual in the UK. A lot of goat's cheese producers here use vegetarian or calves' rennet, but cheesemaker Charlie Westhead swears by keeping it 100% goat. He thinks it adds "an extra dimension" to the flavour of the cheese, which echoes what cheesemakers in my previous piece were saying.

Anyway rennet ramble over, Ragstone is a pretty cheese with a velvety white rind and smooth interior. It's made with unpasteurised goat's milk in Herefordshire overlooking the River Wye by Neal's Yard Creamery. The company was originally based in the South East of England and was part of Neal's Yard Dairy, but it is now completely separate and relocated to Herefordshire in 1996.

The piece I bought in mid October had a rich creamy flavour with lemony, herby notes and an earthy finish. There was an interesting mix of textures as well with the silky rind giving way to an oozy outer layer and a smooth paste inside. Best of all, the flavours and the textures all seemed to balance each other really well.

Sometimes there's a macho swagger to goat's cheese - the billy goat flavour is just too overpowering - but not with Ragstone. It's a harmonious little cheese.


How to eat: This is a versatile cheese, which works on a cheeseboard, but is also great in salads, tarts and sandwiches. Try it in a salad with pear and walnuts, or grilled with marmalade in a sandwich. Beetroot and rosemary are also friendly flavours.

What to drink: A grassy sauvignon blanc from the Loire Valley is a classic accompaniment to goat's cheese. The CheeseWorks in Cheltenham recommends a crisp English white from the Three Choirs Vineyard called Coleridge Hill