CHEESE OF THE WEEK: Berwick Edge 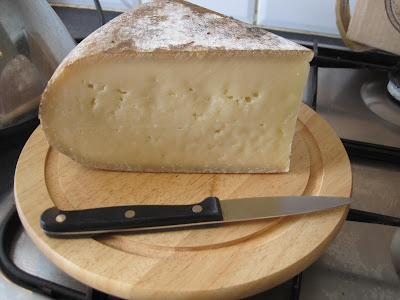 Unless you live in the North East of England, you might not be familiar with Berwick Edge, which is made by Doddington Dairy in Northumberland and is mainly available in regional delis and farm shops.

That's a shame because this unpasteurised Gouda-style cheese, which is aged for between 12-24 months, is an absolute cracker. The cheese I tried managed to retain the milky freshness of its youth while also possessing those fruity caramel flavours that come with age. There was a nice salty hit to it as well.

Don't just take my word for it either. Members of the Specialist Cheesemakers' Association awarded it with the 2011 James Aldridge Memorial Trophy earlier this year, which goes to the UK's best raw milk cheese.

The trophy is named after legendary cheesemaker and affineur James Aldridge, who helped reinvigorate the artisan cheese sector in Britian in the 1980s and 90s and passed away in 2001. In a weird twist of fate, Doddington's MD Margaret-Ann Maxwell took advice from Aldridge when she first started cheese making.


Where to buy: The Pantry, Bamburgh

How to eat: Good in sandwiches when it's young, but when it's older and fruitier it works well as cheese on toast or over pasta, or simply as part of a cheeseboard.

What to drink: Try an off-dry riesling from Germany or the Alsace. The combination of sweetness and mineral notes works well with the fruity, salty flavour of the cheese.