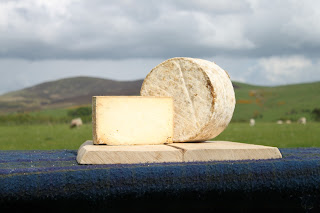 
HJ Errington in Carnwath, which is best known for its Lanark Blue and Dunsyre Blue cheeses, named its new washed rind cheese Elsrickle after a neighbouring village. The cheese is washed in Fallachan – a type of cheese ‘wine’ also known as blaand, which has been made from fermented whey in Scotland for centuries.
“We started making it this year due to several customer requests,” said Selena Cairns, who is a partner in the company and the daughter of founder Humphrey Errington.


The company has also launched a hard ewes’ milk cheese called Corra Linn named after one of the water falls on the Clyde. The cheese is matured in cloth for at least five months and weighs 6kg.


“We have been experimenting with it for the past few years as the techniques are very different to blue cheese,” said Cairns. “It has been difficult to get the cheese consistent. We have found that as the ewes’ milk changes throughout the season it gets harder as the fat content of the milk goes up. We are really pleased with the results although the cheese does change though the season giving a variety of different flavours.”